What Was Dalton Really Up To? Part 1

I've been thinking a lot about Dalton Teague's lost years, and about how he's perceived.

Teague's public persona is well-known. In his media appearances, he always comes across as a sort of loving grandfather figure who created OmnIPark to teach kids about science. There isn't much to say about "PR Teague," other than that this persona is clearly inspired by Walt Disney, perhaps with small doses of Richard Feinman and Carl Sagan thrown in here and there. 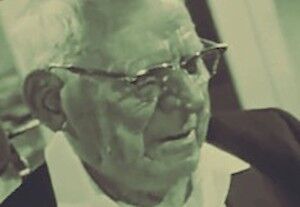 Then you have what I call "Conspiracy Theory Teague" or more to the point, "Second-Option Bias Teague."

That basic line of reasoning goes something like this: Dalton and his wife Evelyn were famously (or infamously) closed-mouthed about the 7 years between the selling-off of Omni Oil and the opening of OmniPark. What did they do during those years? Well, obviously they trekked to remote Tibetan monasteries and Egyptian temples, where they leatrned occult secrets and summoned demons.

Yeah, so allegedly it was "duymons!" that inspired the creation of OmniPark, and some kind of dark demonic energy lies at the park's heart (see also: ley lines, Crowleyan geometric magick in relation to OmnIcons, and a lot of other bullshit targeted at the kinds of people who watch 5-hr YouTube videos about the Illuminati...)

Conspiracy Theory Teague makes about as much sense as any other conspiracy theory. You either believe it or you don't, and it's not my aim here to argue anyone out of a belief. Posts about this are easy to find on the OmniParchaeology forums (as well as others I won't bother to link), and there are just as many of rabbit holes to fall down as there are for people who believe Elvis and Tupac are alive and well, running convenience stores in central California.

My aim with this series of posts is entirely different. I don't think Dalton Teague made a deal with the Devil, or with any dark force. Just the opposite: I think he attained a kind of spiritual enlightenment on those journeys, and OmniPark was his way of trying to transmit what he'd learned to the public, in ways they could understand and process it.

Believe me ---- I fully realize how absurd it sounds to suggest that OmniPark was designed to help people awaken their chakras. The most obvious objection is that OmniPark was built by national corporations and oil billionaires, for the purpose of making money - just like every other theme park!

It sounds even more ridiculous than Conspiracy Theory Teague, in a way. Alien lizard people? Okay, we're willing to believe that. But a Texan oil billionaire invested huge heaps of money in a theme park for the purpose of helping humanity wake up from our ego delusions? That's too crazy to even be worthy of serious thought.

...or, I suggest, so crazy that it just might actually be true.